Gor Mahia today faces Kariobangi Sharks in their first appearance in Kisumu Stadium this season. Gor Mahia will be seeking their 12th league win of the season and hoping to keep touch with leaders Sofapaka who are a point ahead but have played 3 more games than K’Ogalo. 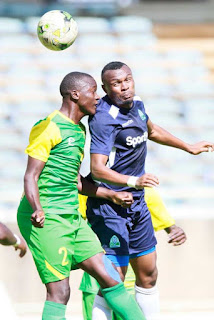 
While Gor Mahia has dominated Kariobangi Sharks in the league since their promotion to the top flight in 2017, recent results that have favoured the Sharks sets this up as an enticing game.


Gor Mahia won their first 4 league meetings, scoring 11 goals in the process while only conceding 3 goals. The 3-0 win in August, courtesy of an own goal and Kevin Omondi and Lawrence Juma goals would however be the last time K’Ogalo experienced joy over the Sharks.


Sharks would eliminate Gor Mahia from the 2018 FKF Sportpesa Shield  through post-match penalties after holding them to a barren draw and later win the league curtain raiser Super Cup and first leg tie by solitary goals.


For a team that is no longer used to losing consecutive games to a local team, the Green Army feels affronted, and while even a negative result in this fixture will not cause any significant damage to our title defence, fans will settle for nothing less than a win – if only to prove to Sharks that we are still the “Husband of Teams”.


Jacques Tuyisenge is the most prolific scorer for Gor Mahia in recent years and it is no surprise that Kariobangi Sharks has been one of the teams to face his wrath.


He scored the 3rd goal in our first meeting with the Sharks, adding to Harun Shakava and Jean Baptiste-Mugiraneza  goals in a 3-1 romp.


In the second leg he was the star of the show with a hat-trick as Gor ran riot in Kisumu, again winning 3-1. His total of 4 goals is the most by any player in this fixture.


While Tuyisenge has reserved his goal scoring boots for continental competitions this season, Nicholas Kipkurui has taken the goal scoring opportunities, scoring 5 league goals for Gor Mahia this season.
Sidney Lokale has also stepped up in place of last season’s top scorer for Sharks, Eric Kapaito, scoring 5 league goals for the Sharks.
Which of the 2 youngsters will deliver for their team?
Posted by kogalo pundit at 01:33 1 comment:

Uncaging the Zoo - Slaughter in Kericho

Gor Mahia’s demolition of Zoo FC yesterday in Kericho not only made it 4 consecutive wins against the side from Kericho, but it was also the 4th consecutive time Gor Mahia was banging in 4 goals against them. 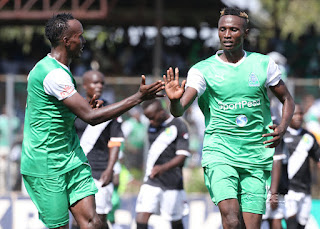 Kenneth Muguna celebrates scoring against Zoo in 2017. He scored the first goal yesterday


Last season Gor Mahia beat the Kericho side 4-2 in the first leg before running out 4-1 winners in the second leg. This season K’Ogalo had earlier demolished them 4-0 in the first leg and the 4-0 win yesterday makes it an 8-0 aggregate win.
Gor Mahia now has an 83% win record against Zoo FC, the highest against any of the current premier league teams.

While Gor Mahia has scored a remarkable 18 goals past Zoo, an average of 3 goals per game, no player has yet emerged as prolific in this fixture as goals have been shared around. There has been a total of 13 goal-scorers in this fixture with 5 players contributing 10 goals

Nicholas Kipkirui has so far endeared himself to fans and his goal yesterday was his 5th league goal for Gor Mahia, making him the club’s leading scorer in the league. He also becomes the latest player to score for Gor Mahia having scored previously against them while turning out for its rivals.


The win against Zoo FC pushes Gor Mahia to second on the table, 1 point behind leaders Sofapaka but with 3 games in hand against them. Gor Mahia’s next league fixture comes against Kariobangi Sharks in Kisumu this weekend

Posted by kogalo pundit at 00:12 No comments:

Like Fish to Water - Gor Mahia vs Bandari Through the Years

On November 12 1995, Gor Mahia travelled to Mombasa to face Bandari in their final game of the season. Gor Mahia led the league but Kenya Breweries (now Tusker) were just a point behind them and waiting to pounce on the league title should Gor Mahia fall to Bandari. There was bad blood between Gor Mahia and Bandari as earlier in the year, a game between the two in the Moi Golden Cup had to be abandoned in Mombasa in bizarre circumstances and awarded to Gor Mahia after several weeks on tussling. Goals from Tom Ochieng, Pius Wamaya and Steve Odiaga settled the scores as Gor claimed their 12th league title before settling for a 18 year wait for their next title.

Bandari has another association with Gor Mahia success. In 1984 CAF had banned Gor Mahia for 3 years following the infamous fiasco in Egypt. With AFC Leopards having dethroned Gor Mahia from the league in 1986, their route back to continental football was through the Moi Golden Cup, the newly relaunched FA cup. Standing on their way in the finals was Bandari who gave them a hard time before Sammy Onyango Jogoo's late strike sealed the win. Of course Gor was to go ahead and win the trophy.

Since then Gor Mahia has played Bandari 31 times in the league. We have tracked down all the results of this fixture and Gor Mahia generally had it easy, like fish taking to water. KÓgalo has won 15, lost 5 and drawn 11, in the process scoring 32 goals and conceeding 15.The surprise top scorer in this fixture for Gor Mahia is Godfrey Walusimbi who has scored three times while for Bandari it is Ambrose Ayoyi who has also scored three times. The two of them are also the only players to score a brace in this fixture while no player has managed a hattrick. The biggest winning margin is 4-0 by Gor Mahia on 15 February 1997, 3-0 by Bandari on 20 April 1991 and 3-0 by Gor Mahia on 12 November 19995. 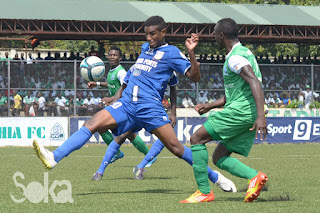 As Gor Mahia matches towards their 16th league title, they start as favourites to win this weekend's match. With George Odhiambo in fine form, he could join the Walusimbi and Ambrose Ayoyi in the 3 goal club for this fixture as he has already score 2 goals (2009/ 2016). For Bandari, it has been six matches against Gor Mahia since their last win (2-1 on 30 March 2014) and will be hoping to break this streak.

Posted by kogalo pundit at 07:00 No comments:

It has always been said that Nzoia, in its various forms of existence, was Gor Mahia's bogey team. The notion is that matches between the two would always be 50-50 affairs over a season, with Nzoia winning in the West and Gor Mahia exacting revenge in Nairobi. Since their last appearance in the league in the 2005 season, it was generally expected that normal service would resume but Gor Mahia has already bucked that trend by winning the away fixture 1-0, thanks to Meddie Kagere. One would however argue that it was at Mumias and not the (in)famous Kanduyi. This weekend Gor Mahia will be seeking to do the double, again not in Nairobi but rather Kisumu. But is it true that Nzoia always posed a problem to Gor Mahia over the years? I decided to confirm this by going over results of all the meetings the two have had in the league.

Gor Mahia actually first played a league game against Nzoia in Kanduyi on 23 June 1979, and not surprisingly, lost 2-1. Nzoia got their goals through a Jimmy Onyango double while Gor Mahia's consolation goal came through George Yoga. However in the return leg at Nairobi's City Stadium on 6 October, George Yoga and Tim Ayieko each scored a double as they beat Nzoia 4-1 on their way to a fourth league title. Since then, the teams have played each other 37 times in the league, with Gor Mahia winning 17 of those matches while Nzoia has won 10 with matched ending in a draw. Gor Mahia has in the process scored 56 goals while conceding 32 goals. The boys from the sugar belt indeed proved a hard nut to crack at home and it was not until 11 June 1988 that a Peter Dawo inspired Gor Mahia got their first away win in Nzoia, courtesy of goals from Peter Dawo and captain Austin Oduor.

While Gor Mahia has a superior record, it has not always been an easy opponent for its strikers. Hesbon Omollo is the leading goal-scorer for Gor Mahia in this fixture with 4 goals with five other players on 3 goals.

No Gor Mahia player has managed a hat-trick against Nzoia while 7 players have managed to score a double against them:

Posted by kogalo pundit at 03:05 No comments:

This Saturday Gor Mahia hosts Muhoroni Youth in a league match but is this fixture the most one sided in the league for Gor Mahia over the past few years? Since Gor Mahia shockingly lost 0-1 to Muhoroni Youth in their first encounter in 2012, Gor Mahia has won all the subsequent league encounters, scoring 24 goals while conceding only 2 and harvesting 30 points out of a possible 33. However a closer look at head to head results versus other teams that have been in the league throughout this period will reveal that Chemelil FC have fared slightly worse against the Green Army.

Chemelil has never beaten Gor Mahia over this period, managing only one draw and conceding 20 goals. Sony FC and Thika United are the only other teams to have failed to beat K'Ogalo in the league during this period. The toughest opponents for Gor Mahia during this period have been Ulinzi who have only handed K'Ogalo 14 points and won 3 times, joint highest with Tusker FC.


Back to Gor Mahia vs Muhoroni Youth; Dan Sserunkuma has scored 5 goals in this fixture, more than any other player with Jacques Tuyisenge scoring 3 times. Only Geoffrey Simiyu and Enos Ochieng have scored a goal for Muhoroni in this fixture. 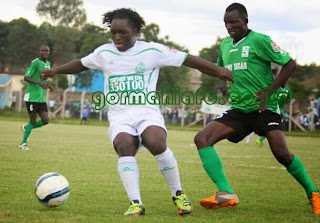 Sserunkuma: Has scored more goals in this fixture more than any other player


Muhoroni Youth can however take consolation that the most famous victory in their history was against Gor Mahia in the 2016 Top 8 Final to clinch their only major trophy.
Posted by kogalo pundit at 10:46 No comments:

When the Boys Ran Riot

It has been 2 years since the boys ran riot, walloping KCB 6-1. Earlier that season, they had also demolished Nakuru Allstars 5-0, the highlight of the game being that wonderful Meddie Kagere skill that left the Allstars goalkeeper bewildered. Since then, Gor Mahia has been more in the business of grinding out results, and are yet to score more than 4 goals. But it has not always been so. I delved into the past to reminisce about the days when the boys ran riot and have come across the following gems. 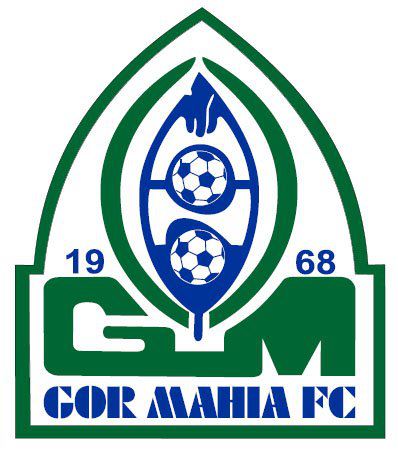